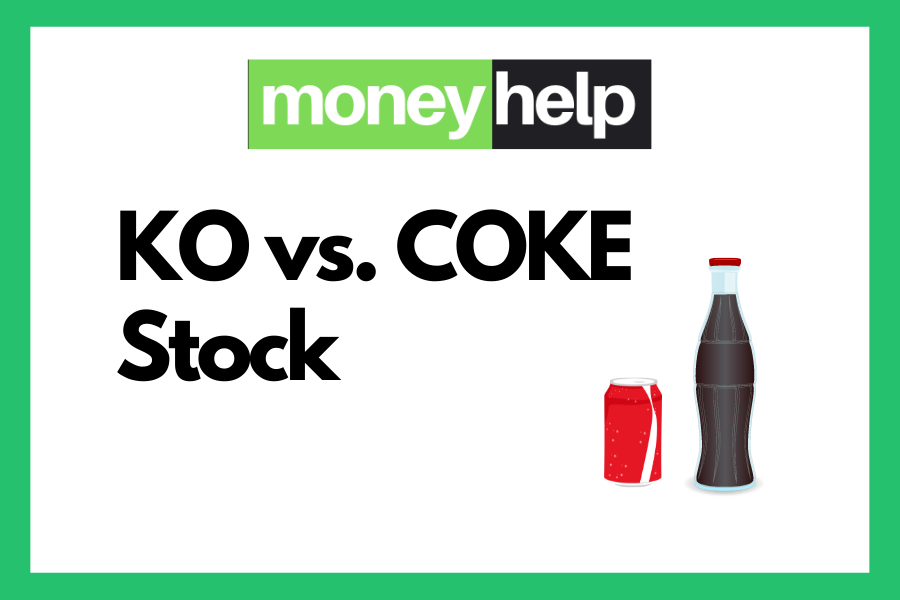 The two companies (KO & COKE), linked by the most well-known soft drink in the world, have very different operating strategies and financial prospects.

Based in Atlanta, Georgia, The Coca-Cola Company (NYSE: KO) is a multinational beverage company which produces numerous nonalcoholic beverages, including one of the most famous consumer products ever conceived and marketed globally.  The Coal-Cola contoured bottle is one of most recognizable symbols in the world.

In 1886, John Pemberton, a pharmacist in Georgia, created a caramel-colored liquid and combined it with carbonated water, which became the original Coca-Cola drink. KO incorporated in 1892.

Eventually, the company made its initial public offering on the NYSE at $40 per share. Today, one share purchased in that IPO, with dividends reinvested, would be worth in the neighborhood of $20 million.

KO is one of 30 members of the widely followed Dow Jones Industrial Average and a component of the Standard & Poor’s 500 (S&P 500), an index which tracks the performance of 500 large companies listed on U.S. stock exchanges.

Coca-Cola Consolidated, Inc. (NASDAQ: COKE) is the largest Coca-Cola bottler in the United States; it distributes nonalcoholic beverages in a region with a population of more than 66 million.

COKE’s franchise territory spans 14 states and the District of Columbia.  Another way to gauge the size of this service area: KO delivered about 19% of Walmart’s total bottle/can sales volume in both 2020 and 2019.

To satisfy this large customer base, COKE, headquartered in Charlotte, North Carolina, has twelve bottling plants in eight states, as well as 17 distribution centers, and has a workforce totaling about 16,000. COKE’s stock market value is $5.2 billion, only 2% the size of KO, but COKE’s shares have markedly outperformed KO’s over both the short and long terms (see page 16).

COKE was founded in 1902 to bottle the Coca-Cola drink by three North Carolina businessmen, including J.B. Harrison (see page 3).  COKE stock began trading in 1972. Then a voraciously acquisitive company, COKE proceeded to purchase numerous bottling companies, including some KO-owned bottling operations, to expand its regional footprint.

As of December 31, 2020, KO owned a 27% stake in COKE, but given the dual class nature of COKE’s stock, KO’s ownership position equates to only 5% of COKE’s voting power.  COKE Chairman and CEO J. Frank Harrison III, together with voting trusts related to his family, holds common stock in the company which controls 86% of voting power of COKE.

KO produces both 1) beverage concentrates which are then sold to a network of independent bottling partners; and 2) finished beverages whereby KO utilizes its owned bottling operations.

Together, the independent bottlers (including COKE), KO’s in-house bottling operation, as well as a host of distributors, wholesalers and retailers, comprise the largest nonalcoholic beverage distribution business on the globe.  See Figure 3.  KO-trademarked brands comprise about 3% of all beverages consumed each day across the world.

In 2020, concentrate sales comprised 56% of KO’s total net revenues, and finished product sales represented the balance, or 44%.  Both proportions are little changed from 2019.  Operating margins are generally significantly higher in concentrates than finished beverages so that segment contributes a much higher proportion of the company’s consolidated operating profits.

KO sits at the top of a carefully-crafted beverage distribution network whereby it controls the highest margin part of the business: the syrup or concentrates business.

KO maintains its own bottling capability, but much of this lower margin business is performed by 225 independent bottlers which operate about 900 bottling plants across the globe.  These bottlers add water and carbonation to the concentrate, package the product and distribute to many levels of consumers, including grocery stores, restaurants and bars.

While KO’s business strategy allows it to control the most attractive part of the business, KO is responsible for the broad marketing of its brands. How effectively it allocates its marketing dollars is key to both its short-term and long-term profitability. KO’s bottling partners, on the other hand, focus primarily on controlling operating costs and making the appropriate capital expenditures in bottling facilities.

A key to making the system work: bottlers must be confident that the price they pay KO for concentrate is fair.  Otherwise, the bottlers could revolt, causing the product not to reach consumers, at least for a time (such an incident actually occurred in the 1990s).

Smartly, KO has implemented a multi-factor pricing mechanism for the concentrate whereby KO has no ability to set prices on a unilateral basis. Instead, syrup prices are determined based on bottler pricing, channel mix, packaging mix, and other factors.

How KO Accounts for its Investment in COKE

As noted on page 3, KO owns about 27% of COKE’s shares and reflects its share of COKE’s profits in the equity income line on its income statement.  Importantly, KO reflects its investment in COKE on its balance sheet as part of its investments in other companies, primarily bottling partners.

Because of equity income accounting policy conventions, KO’s investment is marked on its December 31, 2020 balance sheet at an approximate $400 million discount to the stock market value of the number of shares it owns.

The majority of COKE’s revenue stems from finished bottle and can sales.

About 84% of COKE’s bottle/can volume are Coca Cola products.  The remaining 16% stems from bottling and distribution accords the company has reached with other nonalcoholic beverage makers like Keurig Dr. Pepper and Monster Energy Company.  COKE also sells product to other Coca-Cola bottlers and “post-mix” products to fountain retailers which add water and dispense soft drinks to customers.

According to agreements it has negotiated with KO and its subsidiaries, COKE must make quarterly sub-bottling payments to KO to maintain the exclusive right to distribute Coca-Cola brands in its franchise territories.  COKE must also make necessary ongoing capital expenditures and meet minimum volume requirements to hold onto these exclusive distribution area entitlements.

Soft Drink Business — Slowing Gradually from a Very High Level in the United States, but Growing Strongly in Many Areas of the World

Americans are gradually acknowledging the adverse health impacts of consuming processed sugar in carbonated beverages.  According to Statista, U.S. per-capita soft drink consumption has declined from a peak of about 53 gallons in 2000 to just under 39 gallons in 2018.  Nonetheless, more than half of all Americans say they still have soft drinks at least a few times a week.

More constructively, as global wealth and consumer disposable income increase, the worldwide soft drink market is poised to grow.  According to Statista, global soft drink revenue is projected to reach $900 billion in 2022 (63% of which is revenue outside the U.S.).  Furthermore, the global soft drink business should grow at about a 5.4% compounded annual rate over the 2022-2026 period.

Summary of Financial Results of KO and COKE

A few key observations from the two companies income statements and cash flow statements over the last few years:

Reflecting its impressive margins and free cash flow generating ability, KO trades at a significant P/E premium to COKE.  Specifically, KO trades at around 25x estimated 2022 earnings (based on the mid-point of company guidance), markedly higher than COKE’s 15.5x ratio (based on analysts’ consensus estimates).  Interestingly, COKE also trades at a 20+% P/E discount to the overall stock market.

KO pays out a large portion of the earnings it records and the free cash it generates as a dividend to shareholders, while COKE devotes only a small fraction to payouts.  As a result, KO shares carry a 2.74% dividend yield, more than twice that of the typical large cap stock.  On the other hand, COKE’s dividend yield is only 0.18%.  KO’s large dividend yield could provide some protection for the stock in the event of a market correction.

COKE is markedly less expensive than KO when one compares each company’s enterprise value (stock market value plus debt minus cash) to its EBITDA, a proxy for operating cash flow.  COKE trades at an enterprise value-to-EBITDA multiple of just under 10.0x versus KO’s 25.2x figure.

Shares of both KO and COKE have appreciated over the short and long terms, but COKE has significantly outperformed its much larger cap peer, as well as the overall stock market, over the last three months, one year, and five years.